Every year Ada Martin, the art teacher at Blocker Middle School in Texas City, brings her best art students by GAR to hang out and do studio visits. This year they were joined by the high school art students, as well! They got to meet GAR resident, Joe Joe Orangias. 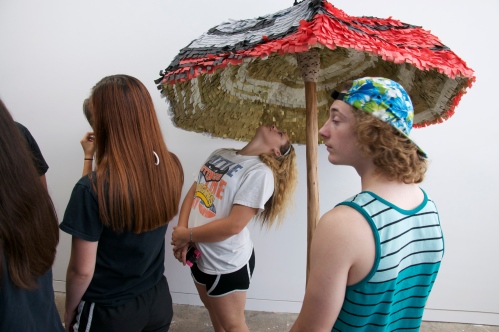 They also spent time in the GAR gallery with George Rush’s exhibition, “Horizon”.

We spotted this little guy out of the GAR office window. Eric thinks it’s a Nighthawk, but Sallie thinks it looks more like a Chuck-will’s-widow, or a female Whip-poor-will. If there are any serious birders out there we could use your expertise! However, we can both agree that it is one beautiful bird.

Every year during the spring bird migration, at least one Indigo Bunting knocks itself unconscious on the GAR windows. Don’t worry, he’s not dead, he hopped up in a few moments and flew away.

And last, but certainly not least, curator Janet Phelps, while doing a site visit for an upcoming project with Jade Townsend and William Powhida, poses with a kite she found on the beach. What a score!